Update from the students on the International trip to Mungeli, India

This Post is written by Guest writer, Professor Molly McAmis and the students accompanying her on the USD trip to CHRISTIAN HOSPITAL Mungeli, India

PROVIDING HEALTH CARE TO THE MOST RURAL PARTS OF MUNGELI, INDIA

The bus driver drove  35 wild minutes into the community where we set up our mobile clinic. Making nothing into something to say the least. To see how we set up shop in an abandoned concrete structure was amazing. Half of the room was used for registration and triage, the other half was used for initial exams.

Once the villagers observed our presence they came in numbers. It became organized chaos! It was like an intrusive waiting game of who was going to be seen first. The triage team imputed patient information and took vitals for  all 56 patients  to be seen. From triage, the patients then headed over to see the physician. There was a trend of common diagnoses seen: fungal infections, gastritis, PID, and HTN. There were a few cases that stood out to us the most. First, was the woman who received cryotherapy for cervical cancer on the mobile clinic. Second, was a tribe of nomadic women who came with chief complaints of fever, dizziness, joint pain, and mouth ulcers. These women were known to chew tobacco and when they were told by the physician to stop chewing tobacco they literally laughed in his face. We were told that telling these women to stop chewing tobacco was like telling them to stop breathing.  After an eight hour day we were exhausted! However, it was an amazing day!

Visiting the “bone-setter” or “QUACKS”

MANY OF THE LOCALS BELIEVE IN EASTERN/HOLISTIC MEDICINE OF MUNGELI.

THE QUACKS ARE Practitioners of this type of medicine tell people that they can fix broken bones by applying certain oils and wrapping injured limbs in cardboard and string. The locals believe in this practice which makes it difficult for the medical doctors and staff at Christian Hospital Mungeli to intervene. The quacks lure the natives in with a 100% guarantee resolution of their ailments and an initially lower upfront cost. However, the price goes up as each day passes and the patient’s symptoms do not improve. Oftentimes, patients are coerced into staying at the Quack’s house for closer observation. Patient’s with broken bones are told they are unable to consume: milk products, meat, calcium, eggplant, sugar, and alcohol while healing. Today, we got to witness this first hand.

1.) Three adorable local village girls 2.) Pretti, a 7-year-old girl who fell off a roof 15 days and fractured her femur. She is “healing” at the quack’s house.  3) A local Quack

Daily Hospital Rounds and the school of nursing

A day in the life of Christian MUNGELI Hostpial

Walking into the hospital impacts all of your senses. You walk through a group of at least 50 family members mingling outside of the ward entrance waiting anxiously in support of their loved one. Children are running and playing in the corridors and open areas. A little girl falls down, pops right back without notice, and goes on her way. As you’re standing there the smells of Indian food being cooked in the family area swift in and gets mixed with the construction of the new hospital going on and the diesel fuel from the row of motorcycles lining the left entrance of the ward. Dogs roam aimlessly and bask in the sun. An aviary houses a variety of birds and water fountains decorated with elephant statues in the middle. All around, you feel the energy of a constant buzz as hospital workers pass through with patients on gurneys. The OR (rather, OT-operation theater- as it is called here) is a short distance away from the ward. Passage is through the open corridors of the hospital. Machinery noises, crying babies, conversations, motorcycle rumbles, and music surrounds you and you’re at a standstill in awe that you’ve finally arrived to India.

As you walk through the doors, you’re welcomed with a doorman who controls how many family members enter the ward. To the left is the female ward and nursery. To the right is the male ward. In the middle, you have a step down/PACU unit and through the far side of that room you can access the Labor & Delivery room. Upstairs has the two ICUs and an overflow of the female ward. The outpatient department, dentist, pharmacy, injection room and offices are behind the OT. Upstairs the nursing school houses 3 classrooms and a library/conference room. There’s an organized flow to the hospital. Nursing students and staff nurses work alongside each other. At first you’re confused and overwhelmed with all the activity going on. But trust me, by your second and third day you’ve mastered the area well and don’t get lost going to the bathroom. 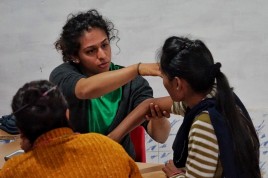 3. ) Hezekiah O’Neal serving as a patient so nursing students can learn how to  perform a neuro assessment