Behind the Podium: Getting to know Dr. Lynda Puhek 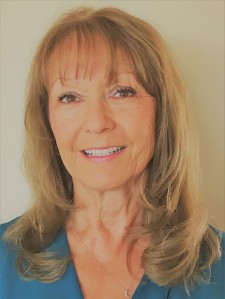 Nurse, secretary, or teacher. Those were the three options that Dr. Lynda Puhek was presented with when she went in to meet with her high school guidance counselor to plan for her future career. How did she end up in nursing? “Well, I got a D in typing. It really narrowed my options down!” When asked to describe her nursing career, Dr. Puhek replied, “it has been a very long road.”

After her father passed away when she was 16 years old, Dr. Puhek went to CNA school with her mom. “It was a way to help her, she was a stay-at-home mom with no skills” she said. She lead a double life during her teen years, but not the same rebellious double life as some of her peers. She was a normal high school student by day, and a CNA student by night. By the age of 18, she had completed both her LVN and her CNA degrees. She went on to attend Los Angeles Valley College, where she completed her 2-year RN degree. After graduating the program in 1979, she promptly got her first job in a telemetry unit at UCLA. She wasn’t even 21 years old.

While at UCLA, she met her husband, who was working there as a respiratory therapist. They married and moved down to San Diego in 1981, where she got a job at Sharp. She stayed there for 21 years, and just so happened to work in the ICU with our very own Dr. Kathy Marsh! “At the time, Sharp did an RN-BSN program that was affiliated with USD,” she said. When she graduated from USD in 1987, she said “it gave me the drive to move forward.” She went back to California State Dominguez Hills in 1994 and got her MSN-FNP. She didn’t stop there, in 2010 she graduated from Case Western Reserve’s DNP program. Her focus was Educational Leadership, and she did cardiac research and nursing at Scripps Mercy while finishing her degree.

Once she completed her DNP program, she and her husband moved to Hawaii for 2 ½ years. While there, she was the chair of the nursing department at Hawaii Pacific University. She’s also been a part of the faculty at Nova Southeastern University and National University.

Did I mention that throughout this whole journey she also had two children? Her story is incredibly inspiring. There is nobody better suited to teach USD MEPN students the ins and outs of medical surgical nursing and pharmacology.

I asked Dr. Puhek to describe a patient experience that has stayed with her throughout the years. She shared a powerful story from her days in the ICU at Sharp.

“I had been caring for a patient who had been in the ICU for about nine months. I would say he was probably in his late 50’s, early 60’s, and he was a failure to get off of the ventilator. His whole room was decorated with photos of his family, so I felt like I really got to know him. His name was Dave. I would always say “Hi Dave, It’s Lyn. It’s such and such day, the sun’s out. I’m going to be your nurse tonight. Hope you had a good day.” I would just talk to him, I wouldn’t talk over him. I would talk to him like he was actually here.

One of the main drawbacks to working in the ICU is that people do get better, and they transfer out and you never know what happened to them. I was working one day, about six months later, and a gentleman came walking in. He was looking around the unit and introducing himself to people, “Hi, I’m Dave”.  We’re used to caring for people when they’re horizontal, in a hospital gown, with tubes everywhere. They look so different when they’re vertical with clothes on. So, this guy came walking by and said “Hi, I’m Dave.” I said, “Hi, I’m Lyn,” and he said “Oh Lyn! I’m Dave! You took care of me!” I just started sobbing, because it never happens. That’s nursing. He sought me out to say thank you. He said “you would not shut up! You told me about the day and what we were doing every shift! I heard every word.” I always think of a patient as being somebody’s loved one. I think it’s important to do that. How would you want your loved one to be treated and cared for?” 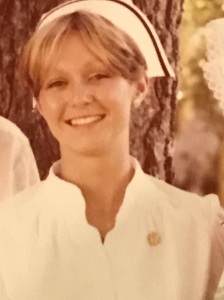 Dr Puhek at her ADN graduation in 1979

Associate Dean at Hahn School of Nursing University of San Diego
View all posts by kathymarsh →
This entry was posted in Behind the Podium, Faculty, Guest Writer and tagged Faculty, Guest writer, nursing education, USD alum. Bookmark the permalink.